The Love Note on the White Board 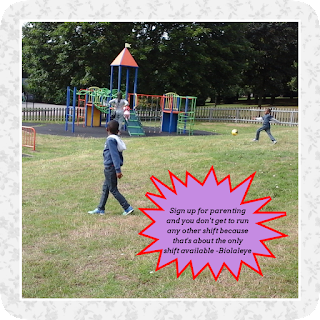 ''Sign up for parenting, and you don't get to do any other shift(s) because that's about the only shift available''


D1: Tomorrow is our Open Day...I want mummy to come.
Me: No, daddy would attend because I am going to be very busy at work.
Hubby: But you know Wednesdays are usually very busy for me because I'd be in clinic throughout.

Turning to the boys: Don't worry...mummy would try and come for 'your' open day, okay?

So much for reluctant commitments...muttering under my breath, mentally rolling my huge eyes as I stroll away from the trio ganging up against me.

Everything appeared set for the commute; 'outside' engagements successfully reshuffled and rearranged but no remedy found yet for the desk that taunts with randomly strewn notes, the intermittent buzzing of the intercom spiced occasionally with the ping-pongy sound of new emails dropping...waiting to be attended to.

Gosh.
How difficult can it get to honor a reluctant commitment?

Now don't get me wrong. Open Days are veeeery important but maybe the importance level is down a notch for someone who manages to go through communication books, assignments and randomly pop into classes to ask random questions, trying to check on the kids 'performances' with the teachers as time and chance happens.

So you see why yours truly selflessly wanted the 'busier' parent to endure the predictably hot sun and traffic gridlock this (open day) time around?

Thank you for reasoning along with me.

Talking to myself...but does it make sense considering the state of my desk and everything else?

Those boys would be disappointed if mummy doesn't show up...he said I'd try and make it and they believed and heaven helps anyone who fails to honor such a forced commitment.

Okay. Even though it doesn't make much sense to endure all, like driving to the school a second time, coming back to work to finish up and then driving back after closing to pick them up but I'll just pick those keys anyway, put one foot right after the other and get out of those two doors.

Oftentimes, it is easier to just ram up 101 reasons, genuine reasons why we do not have to get up and show up.

But when the chips are down, those reasons would pale into miniscular insignificance. Like it smacked me right in the face on getting to my 3rd Grader's class...where I was confronted by one of the truths of my situation, proudly pointed out by my ecstatic lil man. 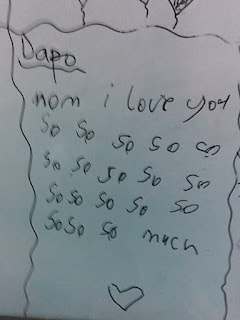 And then it didn't matter anymore.

None of those things I shelved to get there through the scorching sun and traffic mattered anymore as I gazed at my Pulitzer prize.

That up there is it, at that moment. The Ultimate Parenting Pulitzer Award, 2015 Open Day Edition.

Parenting is about the hardest but most rewarding task I've ever undertaken, seriously.

You get thrown a lots of curves which includes getting up or being forced from bed..yes...showing up when it is least convenient, among other things, deluding yourself into thinking you are going on vacation but you are just geographically transferring tasks and worries...but then you have to do what you have to do because you already signed up to do this and no other shift is available.

And that is not discountenancing the many times one might feel overwhelmed, beaten, battle with internal and external stress and myriads of emotions, unattended to-do lists, personal struggles, fear, insecurity, etc

I'm not going to pretend that showing up this one time was a walk in the park considering that two + half round trips were made the same day and hours were lost in traffic but the joy, love and satisfaction given / received trumped the inconveniences.

Neither am I pretending that showing up or taking ownership of our various commitments - which may take diverse forms and shapes - is ever going to be easy but it does have its own rewards after all, in the heartfelt thanks, the pure joy reflecting in the beautiful smiles that light up the little faces, in the sense of satisfaction and fulfillment, in little arms snaking their ways round one's necks and hearts in warm appreciative hugs, and of course the little black notes on the white boards.

And I already look forward to more beautiful moments, that is if I keep managing to still the little voice of reason that keeps throwing up the whys and whats and what nots.

Popular posts from this blog

July 05, 2014
Totally unrelated to superheroes but it's what we're watching as I type this So we love Spiderman...Superman...Hulk as much as we love Old Trafford. It's official. Because I belong to an all-boys clan and if you can't beat them.... *sigh*...
4 comments
Read more

Once Upon A Crisis

September 18, 2013
Source *Long Rambling Alert* It was my penultimate semester and the day started like any other Thursday on campus for me. I joined my BFF, T to go join the other ‘Cadets’ for our early morning routine, jogging round the campus, singing and then converging at the sports complex for the last lap of our parade. (Ask me who or what we were training for)
16 comments
Read more

Maternal Mortality: A Fatal Error...one too many

November 07, 2015
She was shivering and sweating profusely as her hubby stood by wiping the beads of sweat off her fevered brow. Her brave clear eyes sparkled with unshed tears as she struggled to keep faith in line with the many verbal admonitions. As she had been doing for 5+ painfully long weeks. Bravely enduring the pain wracking her entire being with all the tubes passed into her, the thirst and hunger...muttering to herself at intervals...praying the pain would go away...praying she would walk out of that room to be with her baby...praying the administered drugs would work the required miracle...keeping faith... Faith...
Post a Comment
Read more